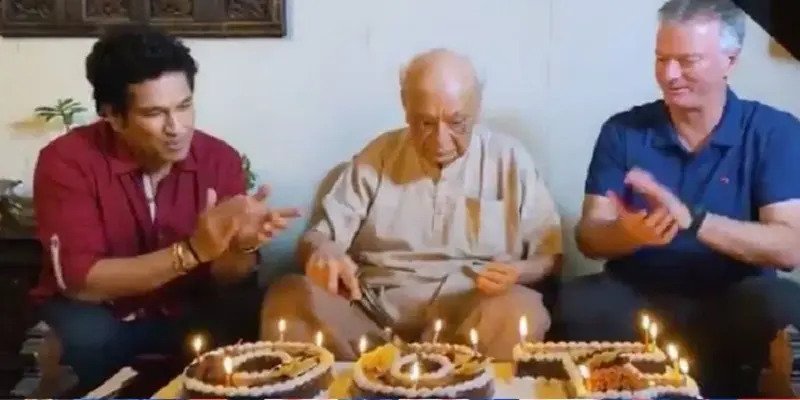 In the game of cricket, we have seen many cricketers scoring a century at least once in their career. However, we have not heard of a cricketer completing his century in his age. Yes, you read it right. The former first-class player identified as Vasant Raiji, the oldest living cricketer in celebrated his 100th birthday.

Basant Raiji was born on January 26, 1920, and it was really glad to see the oldest living cricketer in India celebrating his special occasion with legendary cricketers Sachin Tendulkar and Steve Waugh. Both the legends marked their presence and cut the birthday cake with Raiji at his residence.

“Wishing you a very special 100th birthday, Shri Vasant Raiji,” former India batting great Sachin Tendulkar tweeted as a caption. “Steve & I had a wonderful time listening to some amazing cricket stories about the past. Thank you for passing on a treasure trove of memories about our beloved sport.”

Raiji featured in nine first-class matches in his decade long career. He has scored 277 runs at an average of 23. He was a specialist right-handed batsman. He made his debut for the Cricket Club of (CCI) and played against the likes of Central Provinces and Berar in Nagpur in 1939.

He made his debut for Bombay in 1941 under the great Vijay Merchant’s captaincy. He also shared the dressing room with other legendary figures like Lala Amarnath, CK Nayudu and Vijay Hazare.

Post his retirement, Raiji joined his family business of chartered accountancy. His love for the game never declined as he went on to write books on cricketers like Victor Trumper, CK Nayudu, and LP Jai.