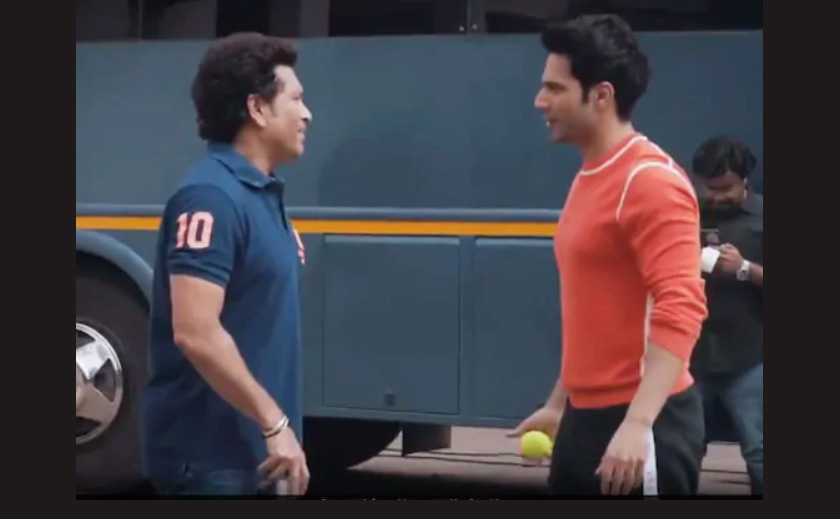 Sachin Tendulkar, on National Sports Day, tweeted a video where he took some time out from a shooting stint to play cricket with the crew members, giving them a special moment to cherish. The experience for the crew members became even more special when Bollywood stars Varun Dhawan and Abhishek Bachchan also joined in. This was a surprise not only for the crew members but also Sachin Tendulkar who greeted both the stars warmly. “It’s always good to mix work with play. Had a lot of fun playing cricket with the crew during a shoot & was pleasantly surprised with @Varun_dvn dropping by along with @juniorbachchan who joined us for some time. #SportPlayingNation #FitIndiaMovement,” Tendulkar tweeted.

As the video progressed, Sachin is seen gently asking Varun, “We are planning to play cricket, are you keen to join”, to which the Judwaa 2 star agreed instantly.

The game started with Sachin taking the strike and Varun bowling. After that Abhishek Bachchan also bowled a couple of deliveries to the Master Blaster. When a ball bounced awkwardly, Tendulkar jokingly said, “it’s a dangerous wicket”.

After completing his batting, Sachin hands the ball to a budding cricketer Jeeya and encourages her with his motivating words.

Varun Dhawan who had a lot of fun during the match expressed this by replying to Sachin’s tweet. Varun also praised the Sachin for his wonderful initiative.

“#SportPlayingNation what a brilliant initiative this is sir. Had a lot of fun running into you that day sir,” Varun replied.

Sachin Tendulkar, the world’s most successful batsman in terms of number of runs scored, retired from international cricket in 2013. He is the only cricketer who has 100 international centuries to his name. He also holds the world record of playing 200 Test matches.